Roll over image to zoom in
Click to open expanded view

Add to wishlist
Compare
Categories: All Laptop, Laptop HP, Others, Stock In All Laptop

Enjoy the power of an Intel Core i7 processor and an NVIDIA GeForce GTX 1050 graphics card in a sleek and stylish design with a thin profile. This sleek and stylish laptop is the perfect device for multitasking, so you can do more with less. It also has a 1 TB hard drive for storing your documents and files.

From 1983 onward, several new input techniques were developed and included in laptops, including the touch pad (Gavilan SC, 1983), the pointing stick (IBM ThinkPad 700, 1992), and handwriting recognition (Linus Write-Top, 1987). Some CPUs, such as the 1990 Intel i386SL, were designed to use minimum power to increase battery life of portable computers and were supported by dynamic power management features such as Intel SpeedStep and AMD PowerNow! in some designs.

Displays reached 640×480 (VGA) resolution by 1988 (Compaq SLT/286), and color screens started becoming a common upgrade in 1991, with increases in resolution and screen size occurring frequently until the introduction of 17″ screen laptops in 2003. Hard drives started to be used in portables, encouraged by th 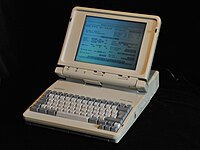 e introduction of 3.5″ drives in the late 1980s, and became common in laptops starting with the introduction of 2.5″ and smaller drives around 1990; capacities have typically lagged behind physically larger desktop drives.

Common resolutions of laptop webcams are 720p (HD), and in lower-end laptops 480p. The earliest known laptops with 1080p (Full HD) webcams like the Samsung 700G7C were released in the early 2010s.

Optical disc drives became common in full-size laptops around 1997; this initially consisted of CD-ROM drives, which were supplanted by CD-R, DVD, and Blu-ray drives with writing capability over time. Starting around 2011, the trend shifted against internal optical drives, and as of 2022, they have largely disappeared, but are still readily available as external peripherals.

There are no reviews yet.